Nano-Emulsification: How Water Soluble THC And Nano Gummies Are Changing The Game

THC oils and concentrates are fat-soluble substances. The body can only absorb fat-soluble substances when taken with high-fat food. This is why cannabis edibles are typically diffused in butter or oil. While THC can be distilled in water, minimal THC properties are absorbed into the body. This may result in low or unnoticeable effects. In the past, this meant the best way to ingest cannabis orally has been in baked goods, candies, and other edibles that contain fatty oils or butter. But, nano-emulsification is changing the game for oral cannabis ingestion.

Until recently, if you wanted a cannabis cocktail, your only choice was to infuse your own with an oily tincture. And cooking with THC meant using oil-based cannabis concentrates or cannabutter. Nanotechnology is changing the name of the game by offering higher potency and faster onset at lower doses without the need for oil or butter. Let’s explore the budding new world of THC nano-emulsification and some of the Nano-THC products we carry at Valley Pure.

You’ve probably heard the cliché, “It’s like oil in water,” meaning two things just don’t mix. Well, scientists have discovered a way to get them to gel with a process called nano-emulsification. Essentially, nano-emulsification infuses water with THC-containing cannabis oil. This oil-in-water substance is achieved by stabilizing the mixture with one or more natural or artificial surfactants called emulsifiers. Combining the mixture of cannabis oil, water, and surfactants results in an emulsion.

The nano in nano-emulsification comes from the size of the cannabis oil particle, which can be macro, micro, or nano. Smaller particle sizes penetrate bodily tissues and are absorbed into the bloodstream, crossing the blood-brain barrier easier while retaining potency. The nanoparticle is the smallest particle we can achieve to date, making nano-emulsions the most bioavailable and potent of any THC product on the market today.

This overview by Granagard illustrates nanotechnology.

What Are the Advantages of Nano-Emulsification?

Studies suggest nano-emulsification may significantly increase the bioavailability of fat-soluble, hydrophobic substances, including Vitamin E, curcumin, lutein, CBD, and THC. The more bioavailable a substance is, the more readily the body absorbs it and accepts the effects of that substance. For THC, that means that consumers of nanoproducts may experience a broader range of effects with increased efficacy and potency.

THC doses with higher bioavailability require less THC to experience effects equal to larger traditional amounts. Bioavailability is essential for cannabis and THC consumption because, without physical absorption, you would experience weak or even non-existent effects. THC would be effectively useless and offer no value to consumers without bioavailability.

The best way to increase THC’s effectiveness without taking a higher dose is to enhance its bioavailability. Cannabinoids are resinous substances that don’t dissolve in water. They naturally resist absorption into water-based substances like the human body. Nano-emulsification breaks oily substances like cannabinoids down into minuscule particles. These can be mixed into water, ingested in the water-based substance, and absorbed into the bloodstream in its newly stabilized form.

Traditional edibles can take a long time to take effect, with noticeable results kicking in anywhere from 45 minutes up to 2 hours. The process takes so long because the traditional edible must first pass through the stomach’s gastric acid and the intestines before processing at the liver. Only when the cannabinoids have gone through the liver do they potentially take effect.

Everybody is different, so identifying a consistent timeline for THC effects was nearly impossible. This fluctuation in onset has caused serious discomfort for many an overeager cannabis consumer. People would think the product wasn’t working and ingest more only to experience sensory overload when the doses finally did take effect.

Due to higher bioavailability, nano edibles, including drink tinctures, might take effect in as little as 15 to 20 minutes. Nano-THC edibles might work faster because the nano-emulsified THC particles are delivered straight into the bloodstream upon ingestion in a water-soluble surface layer. This allows the body to absorb cannabinoids before they embark on a long journey through the GI tract and on to the liver.

This shortcut may allow nano edibles to kick in within 15 to 20 minutes with full effects potentially manifesting in 30 to 60 minutes after consumption.

If you’re looking for cannabis nano-THC products that might deliver full-spectrum effects without the wait, try some of these premium edibles at Valley Pure today. 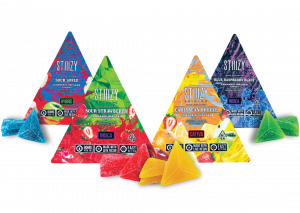 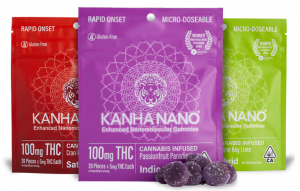 Kanha Nano uses nano-emulsification technology to produce tasty THC and CBD nano gummies infused with cannabinoid particles smaller than a wavelength of light. The product claims to offer one of the fastest-acting, most complete cannabis products on the market. Kanha Nano Gummies come in 100 mg packages containing 20 pieces with 5 mg THC each. Choose from indica, sativa, and hybrid varieties in many juicy flavors. These include Passion Fruit Paradise, Galactic Grape, Sugar Plum, and many more, with vegan options available. 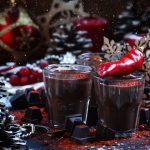