10 Music Artists From Central Valley, California You Need To Know

The Central Valley of California is home to countless artists and musicians. From the North to Central regions of California, you’ll find a bevy of music being made from all genres. Looking at Sacramento and all the way down to Bakersfield, the talent is certainly not lacking. Valley Pure’s staff loves to find popular, new, and emerging Central Valley artists to listen to at our dispensaries.

Some of these artists are national touring acts, while others are on the rise, or have already made an indelible stamp on the music scene. Check out these 10 emerging and/or established Central Valley artists that you should be listening to. This list covers hip-hop, pop, folk, EDM, rock, and more. When you’re visiting the area and need high-quality cannabis products, we are easy to find. With locations in Woodlake, Farmersville, Lindsay, and Lemoore, we are the Central Valley’s preferred cannabis dispensary.

Zacari is a singer, songwriter, rapper, and multi-instrumentalist from Bakersfield, California. Music runs through his veins, which comes as no surprise after learning he grew up in a musical family. He began attending performing arts school at age 8. You likely most recognize the name from Kendrick Lamar’s “LOVE.” This track put Zacari’s soulful vocals out to the world and he’s continued to grow since.

Hobo Johnson is nothing like the other emcees on this list of Central Valley artists. The Sacramento native blends punk, folk, and hip-hop with a mix of spoken word poetry and rap. He’s known for his quirky, honest storytelling, and he certainly has many stories to tell. When Hobo Johnson first started performing he was living out of his car. He soon built a solid following which grew to his level of popularity today.

Originally from Bakersfield but now based in LA, Mono/Poly is known for his instrumental hip-hop and experimental EDM. His beat-making takes a busy approach, cluttering a variety of genre-defying sounds with off-centered humorous vocals. Mono/Poly has been making music for well over a decade. Over the years he has found himself working with Ice-T, Thundercat, Public Enemy, and more.

Honyock is a four-piece folkadelic psych wave band out of Sacramento, California. Their groovy nostalgic sound brings back the golden elements of classic rock but with an updated feel. Honyock’s music is littered with sly guitar riffs, trancey synths, and catchy lyrics.

Baeza brings swagger and flow to this list of Central Valley artists. The Fresno native artist is known for his relaxed delivery that is introspective as much as is it sybaritic. Baeza has been in the game for over a decade, releasing a handful of full-length albums over the years. He has worked with 2 Chainz, Baby Bash, Sage the Gemini, and more.

Mozzy is definitely one of the most exciting artists out of Sacramento and Central Valley as a whole. The EMPIRE artist rose to fame after appearing on the Black Panther soundtrack in 2018, which found itself Grammy-nominated. Since, he’s collaborated with huge names like Ty Dolla $ign, YG, Logic, and more. 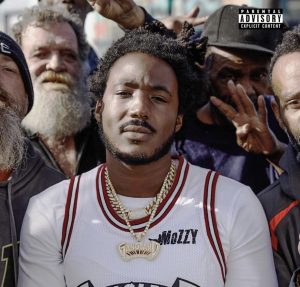 Although he wasn’t born in Central Valley, Haiti Babii grew up in Stockton, California. There he was raised on soul and the blues. It wasn’t until high school that he found an interest in hip-hop, but rather than just taking a dip—he dived right in. Not long after debuting in 2018, Haiti Babii quickly had a strong buzz around him. His fanbase continues to grow rapidly.

Death Grips is unlike anything you’ve ever heard before. This punk hip-hop duo is a concoction of glitched-out production and violent singing and rapping. It’s certainly intense, but critics are drawn to it. Though their music doesn’t cater to the average listener, it has found immense underground success.

Rituals of Mine is a sister duo based out of Los Angeles hailing from Sacramento, California. Their multi-genre sound blends dark synths and electro-pop with dreamy vocals full of passion and emotion. The two sisters have been creating music with each other from a young age, with Rituals of Mine as their latest project.

Though Stunna Girl is based on the East Coast now, her roots lie in Sacramento, California. Regardless of her current location, Stunna Girl has left a strong imprint on the hip-hop scene in the Central Valley. She is no doubt one of the hottest female rappers out of the state’s capital. Her assertive, personality-packed bars are assertive yet catchy and memorable.